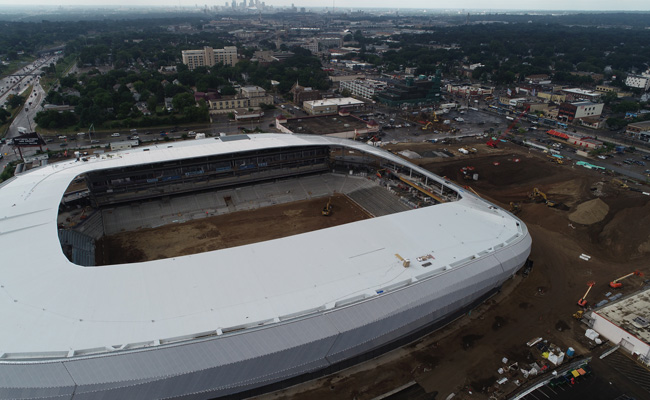 If you’ve been driving along I-94 between Minneapolis and St. Paul, it’s hard not to notice the new soccer stadium — Allianz Field — going up just north of the Snelling exit. Since November, it seems like the steel structure has been growing at a rapid pace.

So, how is Allianz Field being built so quickly? Good Question.

Construction on the St. Paul stadium began in June 2017 and is expected to finish by February 2019. That’s a 20-month timeline.

“The technology in construction now is even more advanced than when we were building TCF or Target Field,” Huber said.

Crews at Allianz Field were able to build large pieces off-site and install them quickly. That includes the metal tresses that sit just below the stadium’s canopy.

Huber says the soil at Allianz Field took less time to prepare before the concrete was poured compared to Target Field and TCF Bank Stadium. There was also more space in St. Paul around the stadiums to put construction equipment.

“In this project, we had a little more room to work so could put up multiple cranes with multiple paths,” he said.

When Mortenson crews started work on Allianz Field, much of it was done on the ground — in a spot where most people passing by would not be able to see. Crews were putting down the foundation and concrete decks, as well making the steel structure that would go first go up in November.

“When these big elements started showing up, I think it took people by surprise,” Huber said.

The first steel crews built up was on the side closest to I-94 because they had to wait for sections of the old Midway Shopping Mall to clear. Minnesota United’s owners had wanted to allow those businesses a longer lease time, so they planned the construction around that timeline. In doing so, the project was built in a U-shape to start, rather than all the way around.

Finally, the exterior of the stadium will eventually be covered with a rainscreen. It’s a fabric coated with PTFE, a Teflon-like material, that will protect fans from wind and rain. It’s more cost-effective and easier to put up than the brick wall constructed outside of TCF Bank Stadium.

This type of rainscreen isn’t yet popular nationwide, but engineers are starting to take notice. Huber says it’s the first time it’s being used on a stadium in the United States.

“This is very unique,” Huber said. “We are ahead of the curve.”

The sod for the field is expected to go down in October and be covered through the winter. The first home game for the Minnesota United will be in April 2019.