Recognizing the most innovative construction companies in the world, the Vision Awards honor companies that use emerging technology in a pioneering way to solve a challenge or transform the industry. Together with AECOM, Mortenson employed tools such as Matterport, Procore Technologies, and drones to improve team member communication, expedite the schedule, and save money for the 588,000 square-foot, $505 million project.

Initially targeted for users in the real estate industry, the team found value in Matterport's visual documentation throughout the construction process. The tool efficiently captured 2D images and 3D data, creating an immersive model of as-built conditions that enhanced the onsite quality effort during construction and will serve as a valued reference for the future facility operations team. 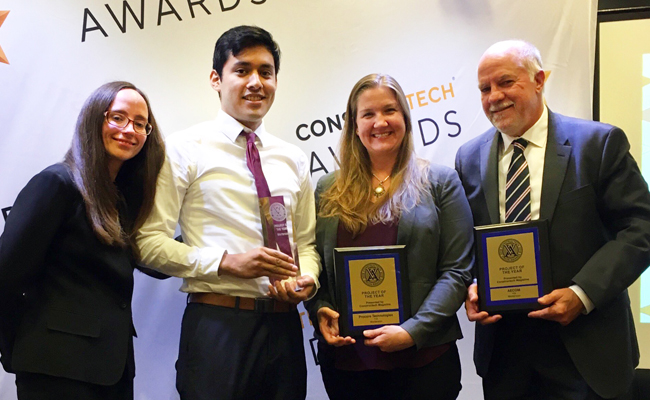 Edgar Rodriguez, Mortenson integrated construction coordinator, accepts the Project of the Year Award along with Becky Wenger from Procore and Howard Nelson from AECOM, who received Technology Enabler Awards for their involvement on the Mercyhealth project.

Additionally, the Mercyhealth team employed the use of drones—the first time Mortenson had used them on a regular basis in Illinois. Every two weeks, the drones captured construction progress onsite. These progress images and scans were used to effectively manage earth moving, site grading, and stockpiling of clay fill and topsoil.

Procore served as a repository for all data gathered by Matterport and the drones, streamlining and better-organizing the information and visuals that the project acquired. This streamlined communications with the customer, design partners, and subcontractor field personnel.

"Emerging technologies like drones and Matterport are proving to be effective visual data tools, paving the way for project teams to better communicate with owners and stakeholders," integrated construction manager, Tim Schubert, says, "It's exciting to see the future of construction technology rapidly advancing. I am proud that our team effectively used these tools to deliver an exceptional experience for all project stakeholders. It is wonderful for them to be recognized for their leadership."

Congratulations to the collective Mercyhealth team for this prestigious win.

Javon Bea Hospital and Physician Clinic—Riverside received their Certificate of Substantial Completion on September 18, 2018 and will be open to the public in January 2019. All 2018 Vision Award winner are featured in the Winter issue of Constructech magazine.