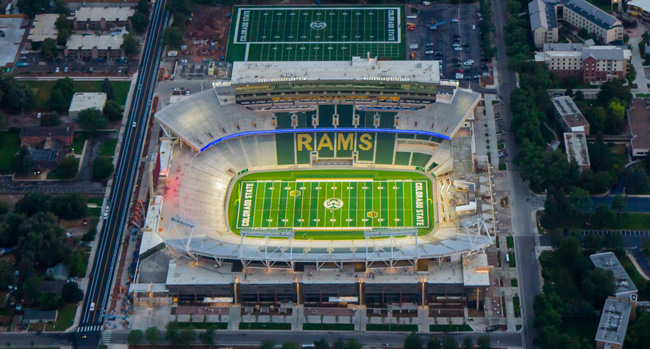 After 48 years, Colorado State University’s football team is coming home. The Rams played for the last time at off-campus Hughes Stadium in late 2016, after 262 games, not to mention a few gigs by the Rolling Stones, Bob Dylan and other rock legends.

It can be hard to turn the page, but the shiny, new Colorado State Stadium is undeniably slick. The $220 million, 41,000-seat venue came in on schedule easily in time for the first kickoff Aug. 26.

“Playing football on campus provides the largest engagement opportunity for the university six times each year,” he says. “Alumni who come to football games will be back on campus, walking in the same places they walked as students and showing their families this beautiful campus. Something that is very exciting is to see people experience the stadium for the first time in person, and to see that something very special has been built here.”

Like football, the project was ultimately based on teamwork.

“We have had a really strong team in place from the start with our design partner Populous, our construction partner Mortenson and our owner’s representation with ICON Venue Group, and then all the internal resources on campus,” says Parker. “We did a lot of planning and kept a lot of strong communication throughout the process of construction, so it has been, in my estimation, a nearly flawless execution of a very complex plan.”

“I think everybody works pretty well together,” Hodge says of the team, noting that Populous and Mortenson have collaborated on a number of sports venues. “We spent a lot of time as a team looking at what options were available.

“For a $220 million project, a 20-month schedule is super fast,” Hodge says of the challenges. “It’s a combination of cast-in-place, precast and steel, so it’s a challenge to schedule.”

But the schedule was maintained throughout construction, and part of it was the team’s vast experience building sporting venues, he adds. ICON and Populous are both focused on stadiums and arenas for professional and college teams, and Mortenson has built more stadiums than any other contractor, including such marquee projects as the Minnesota Vikings new U.S. Bank Stadium in Minneapolis and the Golden State Warriors under-construction Chase Center in San Francisco.