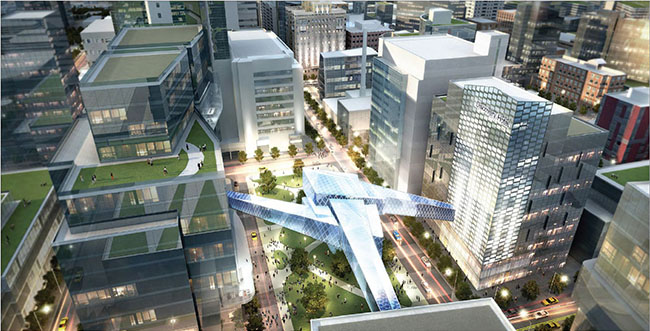 Mortenson said Thursday it has selected RSP Architects of Minneapolis and St. Louis-based HOK as the design team for the redevelopment of Discovery Square, one of six sub-districts in Rochester’s Destination Medical Center project. Click here to read the full story.

Mortenson expects to break ground by October 2017 on the first Destination Medical Center building ordered by Mayo Clinic for downtown Rochester. The project cements the company’s role as both a builder and developer in the first stage of the 20-year redevelopment project. In September, Mayo picked Golden Valley-based Mortenson as the developer for Discovery Square, one of six sub-districts to be redeveloped in the $6 billion buildout plan. Click here to read the full story.

Mortenson has been chosen as the developer for the research campus of Mayo Clinic’s Destination Medical Center (DMC) in downtown Rochester. The six-block subdistrict which will be called Discovery Square is supposed to “serve as a point where physicians and scientists will come together with businesses and entrepreneurs to accelerate advancements in medical research and technology for critical advances in patient care,” according to an announcement. Click here to read the full story.