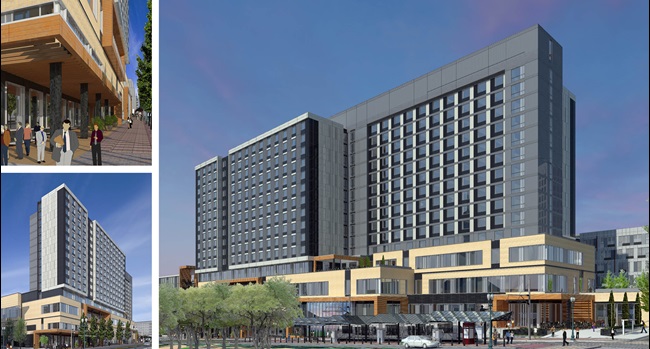 The design process for the Hyatt Regency at the Oregon Convention Center is well underway. The Design-Build team of Mortenson Construction and ESG Architects had their first Design Review Hearing with the City of Portland on August 18th. Every new construction and remodeling project within the Portland Design Overlay Zone must adhere to this process, the purpose of which is to maintain and enhance Portland’s historical and architectural character.

Results from the first Design Review Hearing are as follows, courtesy of Beverly Corbell and the DJC Oregon:

...Located in the Central City commercial district with design overlay designation, the hotel will be 180 feet, six inches tall with a floor area ratio of 12:1 with a 3:1 bonus allowed. Mortenson Construction’s Portland office is working with Hyatt Hotels Corp. as developer for the Metro-owned project. ESG Architects of Minneapolis is designing the hotel and garage.

City planner Tim Heron initially outlined 13 different issues that city staff identified for the hotel and garage within three areas where design guidelines had not yet been met: architectural coherency and contextual response to the Lloyd District, active floor use on Northeast Holladay Street and corner activation at Northeast Second Avenue.

"Ideally, construction should start in early 2017 with Design Commission approval being granted before the end of the year. The only thing that could stop (the project) now is delays,” Cruickshank said.

After a lengthy discussion of all the issues by commissioners, Heron suggested that the project come back for a “soft” hearing on Sept. 29 to accelerate the process.

“It would be more of a work session,” he said, suggesting that Design Commission approval come in the following design review meeting.

“One more hearing and we’re done,” he said.