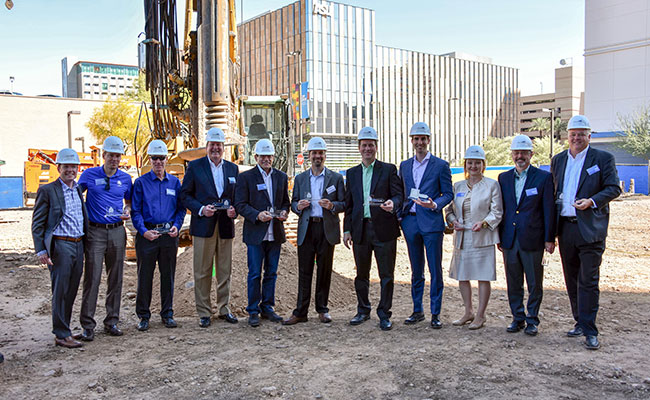 Mortenson held a groundbreaking ceremony on Friday morning for the newest hotel in downtown Phoenix. The company is developing and building a Hampton Inn & Suites by Hilton at the intersection of N. 1st Street and E. Polk Street, centrally-located near entertainment and business, and immediately south of the downtown campus of Arizona State University (ASU).

The hotel is Mortenson’s first development project in downtown Phoenix, as well as the Hilton’s first Hampton Inn & Suites product in the downtown area. Mortenson has had a presence in Arizona since 2000.

“Hampton Inn & Suites opening downtown is just another validator of what we all know to be true, that downtown Phoenix is the place to be,” said Phoenix Mayor Greg Stanton. “Right here in the heart of our downtown – along Central Avenue, shouting distance from the light rail and Central Station, less than five minutes from Sky Harbor International Airport – this Hampton Inn & Suites is really in the center of it all. National and international guests will experience and contribute to downtown’s thriving 18-hour-or-more economy.” 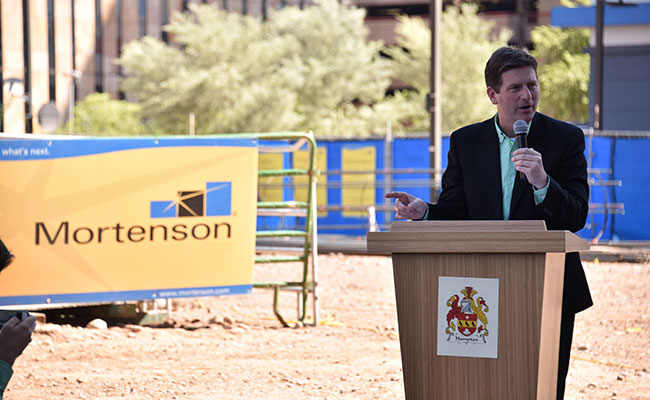 Mayor Stanton commented on the hotel being in a location of convenience, with some of the country’s best restaurants, live music, and art being minutes away by foot, bike, or light rail. He also noted that the New York Times says Phoenix is now the city ranked fourth for car-free vacations for the urban traveler by the New York Times.

“This new hotel under construction is a great economic driver for downtown,” said Christine Mackay, director of economic development and community development for the City of Phoenix. “We had, for so long, an 8-hour downtown economy. People came in for work at 8:00 in the morning and would leave as fast as they could at 5:00. Bringing in these great hotels and residential opportunities contributes to a much more vibrant evening economy for downtown.”

The groundbreaking ceremony was attended by representatives from the City of Phoenix, Hilton, Mortenson, PK Architects, Dibble Engineering and Downtown Phoenix Inc. (DPI).

Dave Krietor, CEO of DPI, also commented on the 18-month timeline being one of the fastest developments he’s seen, from conception to a shovel in the ground.

“We have enjoyed the collaboration with Hilton and their assistance in helping this Hampton Inn & Suites reflect the unique downtown Phoenix vibe,” said George Forristall, development executive, Mortenson.

Construction on the 11-story, 210 key hotel is scheduled for completion in summer 2018. The hotel was designed by PK Architects with interiors by Design Force. This is the second Hampton Inn & Suites that Mortenson has developed in the past three years. The hospitality market in Phoenix continues to strengthen with the growing demand in the area.