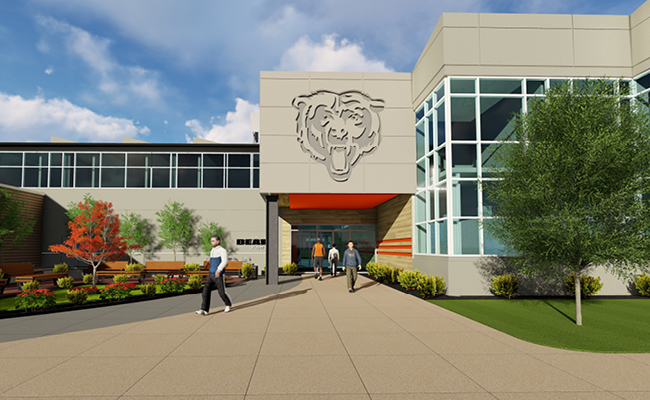 Mortenson has completed the enclosure of the major new addition to Halas Hall, putting it on track to complete the expansion and renovation of the home of the Chicago Bears National League Football team before the start of next year’s football season. The modernization, including the 162,500 square foot addition that more than doubles the size of the Bears’ headquarters, will deliver an expansive, state-of-the-art training center for players, coaches and the entire football operation.

“The Chicago Bears are investing for now and the future with this world-class facility. The Bears are providing all of the tools, equipment, technology and amenities to help its players and coaches prepare and perform at their best,” said Lori Leber, Mortenson design phase executive who is overseeing the project. 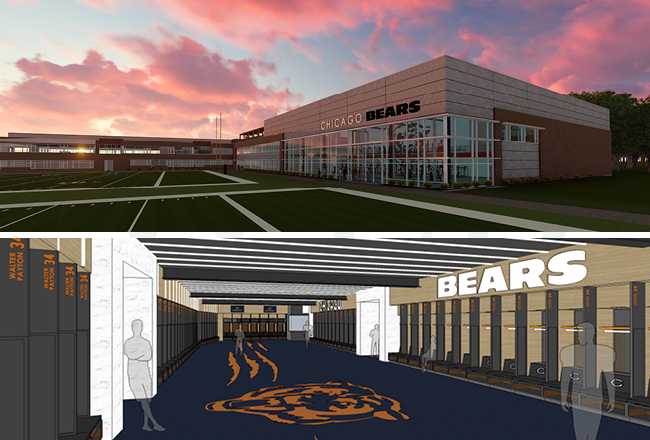 The current project follows the 2013 Halas Hall renovation led by Mortenson that upgraded the Bears’ business offices and added a state-of-the art media and broadcast center, viewing suite and cafeteria. One of the top three national sports builders, Mortenson has completed more than $8 billion in professional and college sports facilities in the past decade.

“We want to use every advantage to help our players and coaches succeed, and a first-class training and recovery center is key to our team development plan,” said Bears President and CEO Ted Phillips. “Mortenson has worked closely with us to complete the expansion and remodeling of Halas Hall as quickly as possible, even as the team and business office staff continue using the building.”

Meeting the ambitious construction schedule while the building is occupied requires careful staging and coordination of work supported by innovative Lean construction techniques. The Bears organization brought in Mortenson from the start, so the builder could play a key role in informing the building plan, design and layout. Mortenson worked with the design team and the Bears to optimize the floor plan so that it would provide the least disruption to the Bears ongoing operations. For example, Mortenson advised on the ideal location for the demolition of the north addition to occur. This allowed for optimal construction phasing which made it possible for the Bears to remain in their existing locker room until the first phase of construction was completed. Mortenson also used prefabricated wall panels to reduce installation time, enabling the team to meet the accelerated construction schedule.

Mortenson and its subcontractors are using the Lean approaches of 5S and Pull Planning to increase productivity and safety. 5S, which stands for sort, straighten, shine, standardize and sustain, makes construction sites cleaner and more efficient. With Pull Planning, Mortenson and its trade partners collectively determine the best work sequences and durations, identify conflicts and develop solutions. These strategies are especially effective at the Lake Forest, Ill. site, where the team has minimal space onsite to stage and store materials and must rely on just-in-time deliveries.

Mortenson broke ground on the addition in March.