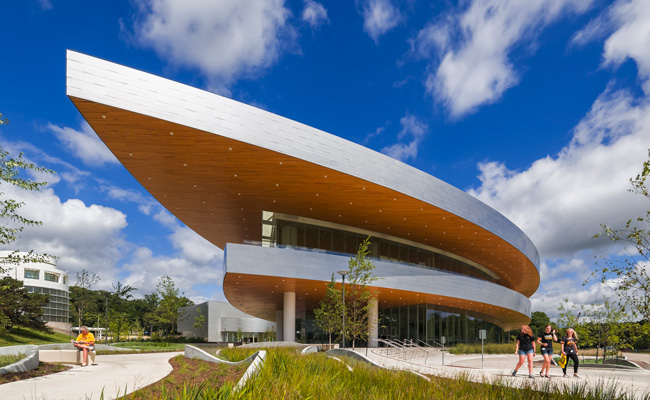 The Master Builders of Iowa has awarded Mortenson Construction the 2017 Masters Award for Exemplary Construction for the University of Iowa Hancher Auditorium.

2017 marks the first year the Master Builders of Iowa created a category for Exemplary Construction. The Masters Award program annually recognizes the exceptional efforts of construction teams executing and completing a project, including management skills, imagination, perseverance under unusual and challenging conditions, and innovative construction techniques. Mortenson received the award at the Master Builders of Iowa’s Annual Winter Conference, in February.

The new, $176 million Hancher Auditorium is a performing arts center, designed by Pelli Clarke Pelli Architects with OPN Architects and includes a large 1,800-seat, proscenium theater, front of house and back of house support spaces, rehearsal room, and administrative offices. The exterior of the 192,000-square-foot complex is composed of 14,000 brushed steel panels. The state-of-the-art facility opened in September 2016 and took three-years to construct.

“It was an honor to be a part of the team that brought Hancher back to life after the devastating floods of 2008,” said Randy Clarahan, Iowa Construction Executive for Mortenson. “The original Hancher Auditorium was named after Virgil Hancher, the longest sitting President of the University of Iowa. It has been called the largest classroom on campus, for the extraordinary arts, dance, music it brings to live in the community.”