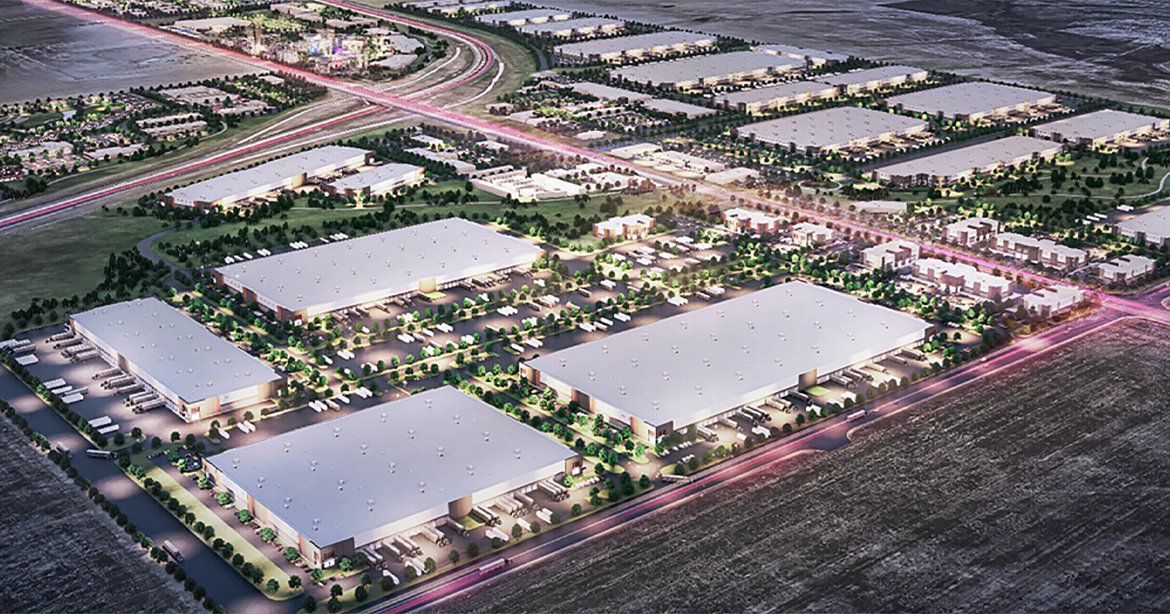 Metro Denver’s industrial market is about to get significantly larger as HighPoint industrial and logistics business park prepares for expansion and its first groundbreaking. Hyde Development and Mortenson Properties closed yesterday on the acquisition of 145 acres just north of their existing 125-acre site. Next month they will add 129 more acres and break ground on the park’s first structure—Building 1, a 541,840-sq.-ft. Class A speculative building.

“It is incredibly rare to have a blank slate opportunity like HighPoint, where an industrial user has the flexibility to build exactly what they need, from 100,000 sq. ft. to over 1 million sq. ft.,” said Daniel Close, First Vice President, CBRE. “HighPoint’s location between an international airport and a major population center is a significant competitive advantage for companies looking to optimize their distribution strategies and get their products to consumers as quickly and efficiently as possible.”

Hyde and Mortenson are developing the park with both speculative and build-to-suit opportunities available. The first building to break ground speculatively is Building 1, slated to deliver in the third quarter of 2021. The building will have 36-ft. clear heights, 50-by-54-ft. column spacing, an ESFR sprinkler system, 92 dock-high and four drive-in doors, 68 trailer parking spaces and 273 parking spaces.

The full site plan for HighPoint is still flexible, but initial plans call for retail development through the middle of the park, along East 64th Avenue, providing walkable retail options for tenants and guests. Design aspects include outdoor seating areas for employees, ample overflow truck parking and potential outdoor yard storage space. The property is zoned for industrial with utilities and roads currently being constructed.

Demand for industrial space in the Denver metro area currently far outpaces supply, and we anticipate that need will only increase,” said Gene Hodge, vice president and general manager, Mortenson. “Mortenson and Hyde saw an opportunity with HighPoint to meet that demand and support the continued growth of the Colorado economy by providing companies of all sizes with the space they need in an ideally located hub at the center of the country.”

HighPoint is located adjacent E-470 with tenant signage visible to the freeway. The site is bordered by Denali Street to the east and East 60th Avenue to the south. The initial 125-acre site included up to 64th Avenue. The incremental 274 acres takes the project up to East 68th Avenue. Infrastructure improvements are underway to widen East 64th Avenue to four lanes at HighPoint (six lanes west of E-470) and to add a full interchange at East 64th and E-470, giving tenants the option to bypass I-70 to reach the metro’s northern and southern suburbs.

The location is a six-minute drive from Denver International Airport and a 20-minute drive from downtown Denver. The park is within three economic benefit zones: a Federal opportunity zone, an Adams County Enterprise Zone and a Limon Foreign Trade Zone.

The industrial sector has performed remarkably well in 2020, according to CBRE research. In metro Denver, leasing activity, net absorption and sales volume were all up year-to-date at the end of the third quarter. The Airport submarket, home to HighPoint, led the metro area in industrial net absorption, recording 476,000 sq. ft. in Q3 alone.

“COVID-19 quickly accelerated consumer adoption of e-commerce and triggered supply chain restructuring as companies sought to prevent a repeat of the inventory shortages experienced early on in the pandemic. These changes have fueled demand for warehouse and distribution space in growing markets like Denver,” said Todd Witty, First Vice President, CBRE.

In addition to marketing HighPoint, CBRE’s Witty and Close are representing Hyde Development and Mortenson Properties in the land acquisitions. Westside Investment Partners is the seller on each of the parcels, represented by CBRE’s Carner, Ballenger and Jessica Ostermick.