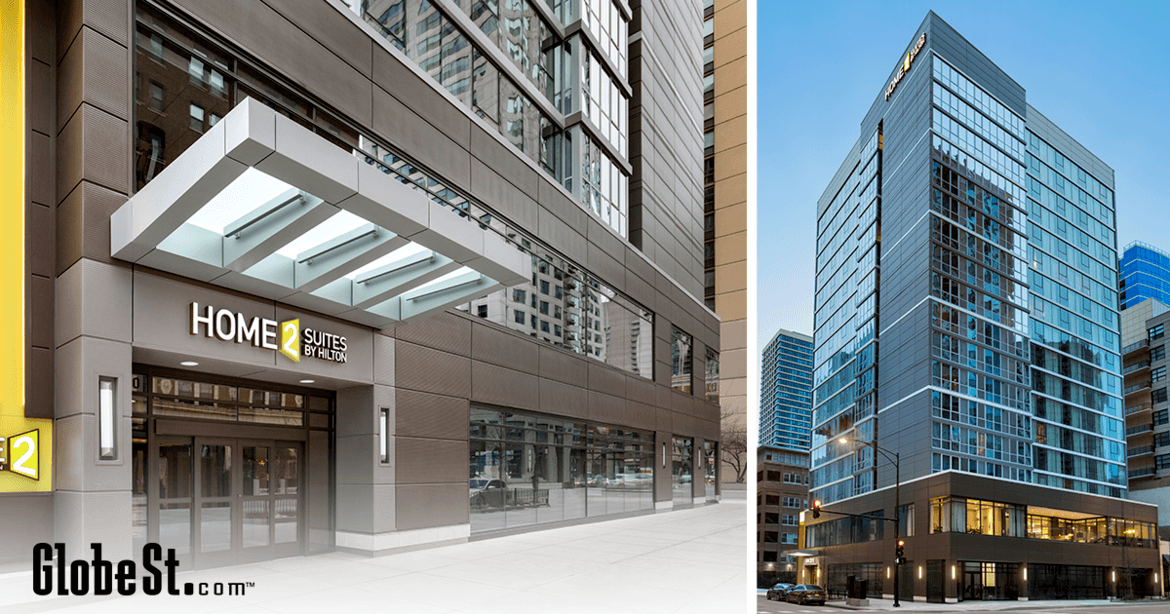 By Steve Lubetkin at Globe St.

“From the beginning Mortenson has been an excellent partner with Akara Partners. Paired with our construction management and development arm, their development and construction team’s knowledge, skills and ingenuity have been integral in delivering a first-class hotel that makes a strong addition to the River North neighborhood and one we are proud to own,” said Rajen Shastri, the founder/CEO of Akara Partners.

With its extensive hospitality development and construction experience, Mortenson built the flagship hotel at 110 West Huron Street in just 14 months on the site of a former parking lot. Unlike the smaller, 3-story Homes2 Suites by Hilton suburban locations, the120,000 square-foot River North building features a modern glass enclosure system and a jump lobby configuration to maximize space for 5,000 square feet of ground floor retail. To meet the challenges of constructing the custom-built Home2 Suites by Hilton hotel while ensuring quality and safety on a site with zero lot lines in a busy city neighborhood, Mortenson relied on:

“The partnership with Akara and Norr Architects has been phenomenal,” said Andy Stapleton, Chicago office Vice President and General Manager. “The Home2 Suites hotel joins more than $600 million in U.S. hotel properties that Mortenson has developed in the past five years as well as more than 100 hotel construction and renovation projects, including modernizing the Cambria Hotel on East Superior Street and the Hilton Chicago on South Michigan Avenue.”

“The transition from construction to operation has been virtually seamless,“ said Chris Pogorzelski, general manager for Aimbridge Hospitality, which is the River North hotel operator. “In a process that has taken other new hotels several attempts that required rework and delays before they could become operational, the River North hotel easily passed tough first inspections ensuring compliance with everything from Hilton brand standards to building codes. As a result, we were able to focus on ensuring everything was in place and ready for our scheduled opening.”

SEE THE ARTICLE ON GLOBEST.COM HERE