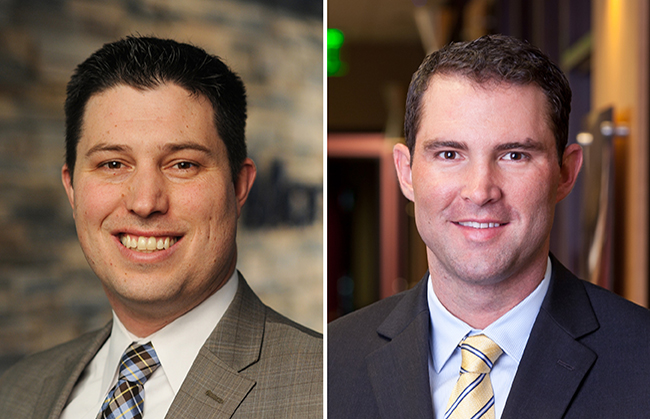 Mortenson is pleased to announce the leadership promotions of Ben Goetter and Brian Fitzpatrick in Phoenix.

Ben Goetter has been promoted to vice president and general manager. Goetter will work closely with Mortenson Senior Vice Presidents Robert Nartonis and Maja Rosenquist in overseeing Phoenix operations for the company. He became general manager of Mortenson’s Phoenix office in 2017.

Goetter has been instrumental in several local projects for Mortenson, including work at Maryvale Baseball Park for the Milwaukee Brewers and Great Wolf Lodge in Scottsdale. Goetter previously led business development for Mortenson in Milwaukee, where he was involved in many landmark projects, including the Harley-Davidson Museum, Acuity Headquarters Expansion, multiple Johnson International and SC Johnson projects, and projects with the State of Wisconsin and City of Milwaukee.

Goetter joined Mortenson in 1998 as a field engineer with the company’s Communication Technologies Group, where he spent the first three years on projects throughout the United States. He earned dual bachelor’s degrees in Architectural Engineering and Construction Management from the Milwaukee School of Engineering. Goetter was named a Milwaukee Business Journal“Forty Under 40” award winner in 2011.

Brian Fitzpatrick has been promoted to director of operations. Fitzpatrick will provide oversight of Mortenson’s construction and field operations, as well as general activities, across Arizona. He previously was a construction executive with Mortenson on the NFL Raiders Stadium project in Las Vegas.

Fitzpatrick joined Mortenson as a project engineer in 2007 and helped lead construction of the Camelback Ranch Spring Training facility in Glendale. He also successfully managed the University Services Building project for Northern Arizona Real Estate Holdings and the McKale Center Renovations project for University of Arizona. Fitzpatrick was named an Engineering News-Record“Top Young Professional” in 2015. He earned his bachelor’s degree in Engineering from Colorado School of Mines.