Akin to Pokemon Go, the new mobile app is helping the University of Washington community “experience” a new computer science building 18 months before its doors open to students

SEATTLE – (July 18, 2017) – After pioneering the use of virtual design in construction, Mortenson Construction has developed a first-of-its-kind augmented reality (AR) mobile app to help the University of Washington community “see” the future CSE2 computer science building – well before its doors open to students in January of 2019. Similar to the popular Pokémon Go, users can either point their smartphones at the construction site on campus – or at a printed handout if off campus – to experience a life-like digital representation of the future CSE2 building.

The app was developed by Mortenson’s in-house immersive-technology team in Seattle, a project led by Marc Kinsman. Users can experience the building’s exterior in AR, and can then teleport inside for an immersive virtual reality (VR) experience in the main lobby, workroom, robotics lab and offices. The app is designed to generate interest and engagement by faculty, students and visitors during the building’s construction, which is located in a popular area of campus. A preliminary version of the “Mortenson AR/VR” app is now available for download on iPhone and Android devices.

“A typical campus construction project like CSE2 can last two years or more,” Kinsman said. “This window presents a tremendous opportunity to engage the public, and to build excitement around campus. AR and VR represent a vast improvement over traditional public engagement methods like flyers, fencing signage or a website. We are scratching the surface of what’s possible.”

In addition to serving as an immersive public engagement tool, AR carries the promise of reimagining the construction site. In this spirit, Mortenson was also among the first companies of any kind to partner with AR smart-helmet maker DAQRI to test AR construction applications last year. AR headsets and goggles have the future potential to provide crews with just-in-time instruction, projections of an installation layout on a concrete slab, or a data overlay that shows how each building system has been performing over time.

The completion of CSE2 will enable the UW to accommodate a growing number of computer science and computer engineering students and faculty, while ultimately bridging the Puget Sound region’s technology workforce gap. Presently, the bachelors-level workforce gap in computer science exceeds that of all other high-demand fields combined.

The 135,000-square-foot CSE2 project is designed by LMN Architects, the same architecture firm that teamed with Mortenson on the original UW computer science and engineering building that opened in 2013: the Paul G. Allen Center for Computer Science & Engineering. At a cost of $105 million, CSE2 is being funded by a mix of public and private sources. In addition to classrooms, lab space and workrooms for faculty, undergraduate and graduate students and researchers, the building will include a 250-person lecture hall, seminar rooms and conference facilities. 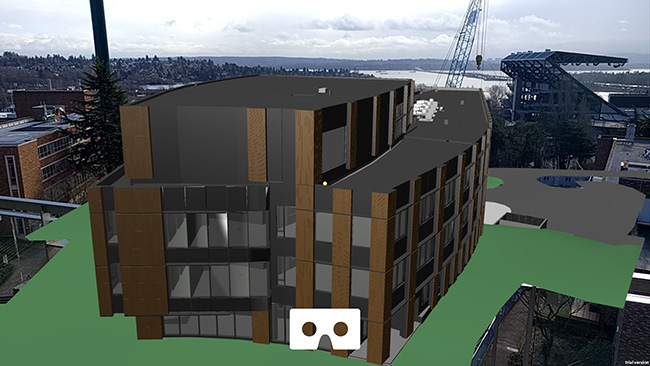 Mortenson’s Seattle office – which helps drive VR and AR innovations across the company nationally – first used virtual design and construction modeling during its work on the iconic Walt Disney Concert Hall in Los Angeles in 2000. Some deemed the project unbuildable due to the architect’s design and its absence of 90-degree angles. In partnership with Stanford University and Disney Imagineering, the team borrowed advanced modeling techniques from the manufacturing and aerospace worlds and applied them to construction.

The next leap came in 2006, when Mortenson used VR to model the UW’s Benjamin Hall Interdisciplinary Research Building. To inform its design, Mortenson’s Seattle team outfitted a dark room with projectors that beamed a 3-D building environment onto the walls and floor. The resulting technology was aptly named CAVE — which stands for Computerized Automatic Virtual Environment.

CAVEs was subsequently used by Mortenson offices across the country, including the team that brought Penn State University its Pegula Ice Arena in 2013. The use of CAVE technology helped avert $475,000 in changes by identifying them in the design phase. Mortenson’s use of VR has also helped shave $1.7 million from the cost of the Atlanta Braves’ new stadium.