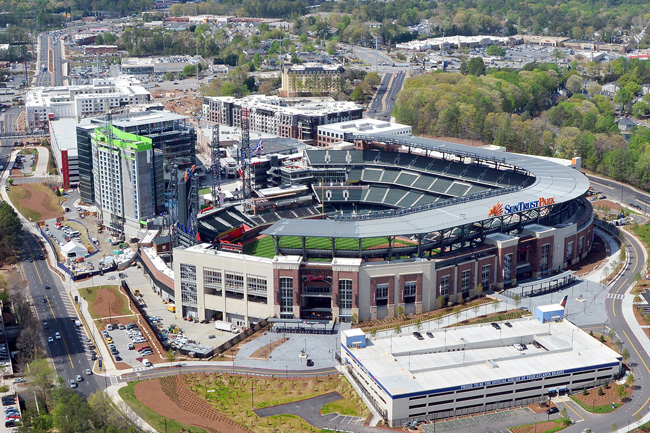 American Builders 2017 is marking a home run as the new SunTrust Park begins to welcome visitors. The construction manager and joint venture of Brasfield & Gorrie, Mortenson Construction, Barton Malow Company and New South Construction has completed the new home of the Atlanta Braves in time for the 2017 season.

The construction team and its subcontractors teamed to complete the project just 29 months after breaking ground, logging more than 5.6 million man hours in total.

“This has been a tremendous team effort in every aspect of the project,” said Rob Taylor, President of Brasfield & Gorrie, which served as lead contractor for American Builders 2017. “It is extremely exciting to finally see the results of 29 months of hard work and dedication. I appreciate the level of commitment that each member of the construction team had to the Atlanta Braves, Cobb County and the community to ensure we provided all stakeholders with a facility that is second to none. It is truly an honor to be a member of this team.”

SunTrust Park’s hybrid design of concrete and steel aided the project’s fast-track schedule in addition to the use of structural precast stadia.

Designed to create the ultimate fan experience, the 41,500-seat ballpark features the best sightlines in Major League Baseball, a large canopy for optimal weather protection, a three-level, 6,000 square foot Chop House, an Xfinity rooftop lounge, and a variety of food and beverage options, including an on-site brew pub. Fans will also enjoy a large shaded plaza with water fountains and an amphitheater.

Other features include clubhouses for the Braves and visiting teams, locker rooms and training areas, and the Braves’ front office space.

Stadium features by the numbers:

The ballpark flows directly into The Battery Atlanta, a 57-acre 1.5 million square foot mixed-use development, featuring boutique shopping, chef-driven restaurants, an Omni Hotel, and The Coca-Cola Roxy Theatre along with residences and the One Ballpark Center office building.

“We didn’t just build a ballpark, we built the infrastructure that supports the entire development” said Derek Cunz, Senior Vice President, Mortenson Construction. “Our use of virtual design and construction technology helped us coordinate schedules and work with the other ongoing construction projects. We also used technology to support the marketing and sales of premium spaces at the ballpark.”

A partnership between American Builders 2017, the U.S. Department of Labor’s Occupational Safety and Health Administration, Georgia Tech Research Institute and the Georgia chapter of the Associated General Contractors enhanced safety efforts on the project, promoting the use of health and safety best practices. As part of ongoing safety efforts, American Builders 2017 teamed up with Kids Chance, a nonprofit organization that supports children affected by catastrophic workplace accidents, and committed to fund scholarships for Georgia students affected by construction-related accidents.

“Our team really pulled together for a strong finish,” said Brasfield & Gorrie Division Manager Chris Britton, who served as American Builders 2017 Project Director. “At no time during construction could anyone outside of our team tell who worked for which of the joint venture partners; it was all American Builders 2017 driving toward a common goal. The on-time completion of this landmark ballpark and sports-anchored development is a testament to the team’s dedication, expertise and hard work.”