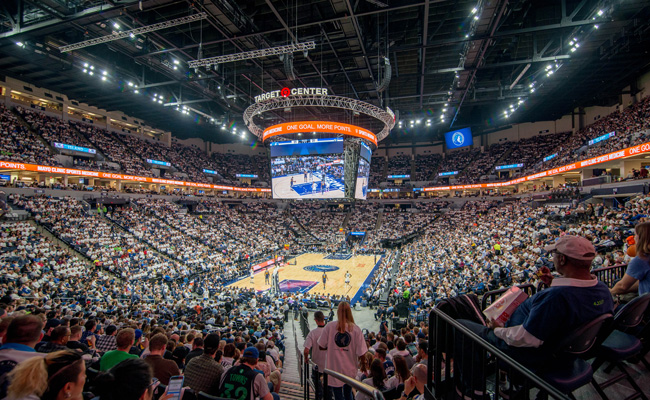 The Minnesota Timberwolves are making a comeback. While the off-season addition of players including Jimmy Butler, Jamal Crawford and Jeff Teague has increased the team's competitive ante, fans have more to be excited about than future playoff prospects. From a $145 million arena overhaul to revamped team branding, the Timberwolves are entering a new era that is centered around a reimagined experience.

This season’s noticeably reenergized fan base is not something the Timberwolves organization takes for granted. Just three years ago, the NBA conducted a survey in all 30 of its markets to assess each team’s gameday experience. Fans were asked to evaluate everything from concessions and parking to facility personnel and bathroom cleanliness. When the final results came in, the Timberwolves found themselves dead last.

“That was a stake through the heart because we knew that we had some inefficiencies and challenges, but never in our wildest dreams did we think we would register 30th out of 30,” said Jeff Münneke, vice president of fan experience for the Minnesota Timberwolves. “It was eye opening.”

Münneke, a 30-year sports industry veteran and the last original Timberwolves employee still working for the organization, was tasked by team executives to help right the ship and transform fan perceptions. While mining the survey data, Münneke and his team discovered that they were failing to provide a consistent experience for fans. This issue originated from the fact that at the time, the Target Center had four separate entities operating inside of the building – the Timberwolves and Lynx, AEG (facility manager), Delaware North (concessionaire) and Levy Restaurants (premium level caterer).

In an effort to bridge the gap, the groups came together and began studying companies renowned for providing exceptional service. While retail giants like Zappos and Nordstrom were discussed, they were most impressed by the Walt Disney Company and its ability to create captivating experiences that produce lifelong customers. Münneke attended the Disney Institute to learn more about Disney’s principles and how they could be applied at the Target Center.

The arena’s resulting “1 Program” is built around the concept that just one moment can create an enduring memory for fans. As the Target Center strives to become the friendliest building in sports, every employee is required to go through training to learn the program’s three main tenets: safety, smile and synergy. “We’re prideful in our teams, we’re prideful in our building and we’re prideful in our city. We’re committed to making this successful,” said Münneke.

In addition to a renewed focus on customer service, fans are enjoying an upgraded gameday experience thanks to a multi-year renovation of the Target Center. Originally built in 1990, the aging arena was in dire need of a makeover in order to keep pace with the glitzy, amenity-rich venues popping up across the NBA. Designed by Perkins + Will and Alliance and built by Mortenson Construction, the project touched nearly every surface of the building and successfully transformed the Target Center back into a first-class venue for sports and entertainment.

Timberwolves fans now have access to several all new premium spaces - the Chairman’s Club, Lexus Courtside Club, TCL Theater Boxes and Club T.I. Within the bowl and concourses, significant renovations included a new center-hung scoreboard (the largest in the Midwest), all new seats, a new Wi-Fi system, and an upgraded sound system and digital signage. A three-story atrium and skyway entrance were also added to improve fan ingress and egress efficiency.

Whether it’s the rejuvenated arena, the discernable commitment to exceptional service, or the promising on the court performance, the Minnesota Timberwolves are making waves in the league. Despite their success, Münneke and his team remain passionate about continuously finding new ways to improve. “The NBA and our fan base are constantly evolving, and we have to evolve with them,” said Münneke. “I want fans to know that if there are things they are frustrated with, let us know. We look at all feedback as a gift. It’s another opportunity for us to get better.” With this fan-first mentality firmly in place, it’s clear that the Timberwolves’ best days still lie ahead.