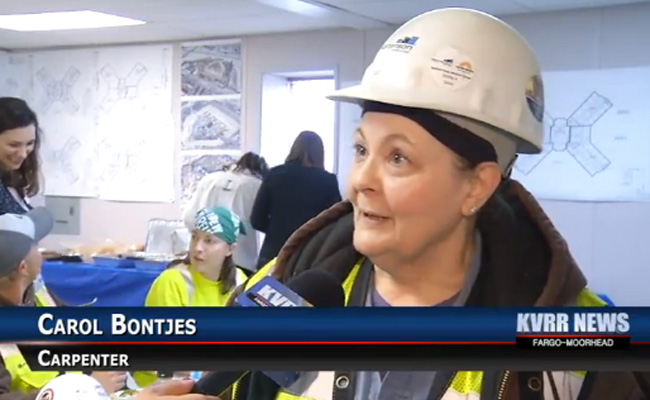 Women in construction usually make up nine percent of the workforce in the country but in North Dakota, that number is cut in half. "We want to make sure that were recognizing those that are in the trades and provide some more exposure to them and more ability to get out in the community and talk about what they do because they're pretty excited about it," says Mortenson Construction Executive, Joanna Slominski. Click here to watch the story.

Today, as part of Women in Construction week, Mortenson Construction threw a special lunch and program to recognize the dozens of women who are part of the crew building the hospital. They are electricians, dry-wallers, carpenters and H-VAC experts. Women from the local universities who have an interest in construction management and the trades also came to learn more about the careers. Click here to watch the story.

The company hosted a luncheon honoring 25 of their female employees who work in skilled trade, and construction management. The women were honored for their work on Sanford's new hospital.  One of the honored employees says it's about showing that women can do it too. "We're smart enough, we know how. We might not be as strong as the strongest guy, but you know what? We get by. We get our stuff done. When you can't out muscle it, you out think it, it works," said Carol Bontjes Carpenter at Mortenson Construction. The event is a part of Women in Construction Week that runs through March 13th. Click here to watch the story.